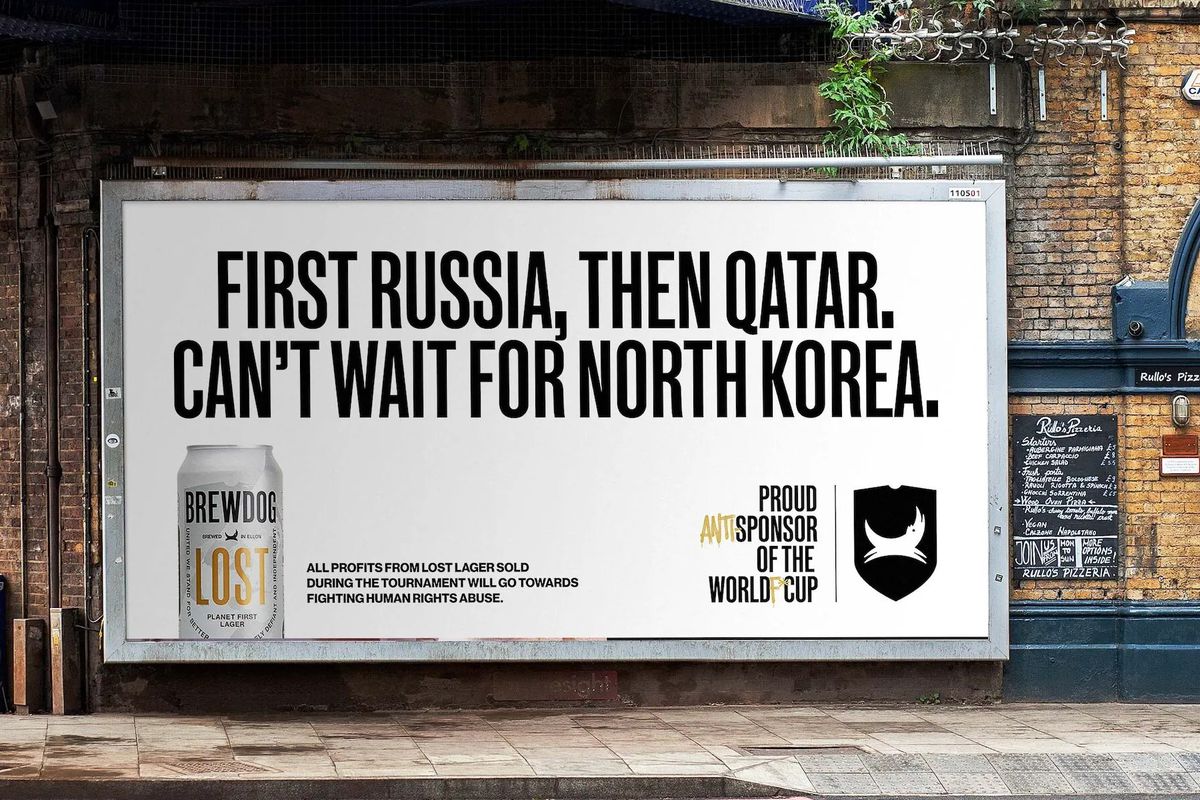 When the multinational brewery and pub chain BrewDog launched an attack on the Qatar World Cup, referencing the Emirate’s alleged human rights abuses in a rather humorous advert, “First Russia, then Qatar, we can’t wait for North Korea”, it articulated the mood of the public perfectly. The mention of being a sponsor of the “World F*Cup” was also a nice, everyman touch.

However, the murky reality is that despite their protests BrewDog are still showing the football competition in their many pubs, are providing beers to Qatar for the event, and aren’t exactly in the best position to be shaming anyone on their employees’ rights records given the countless accusations of a toxic workplace culture that have hung over the company and its reputation for years.

This raises the debate of whether it is hypocritical to seek to criticise others and by implication position yourself as a ‘purposeful’ organisation when your business behaviours don’t live up to that depiction. Doing so risks alienating your stakeholders and violating the trust and the authenticity of your firm’s mission statements. In these days of citizen journalism, with social media amplification at the touch of a button, if you don’t walk the walk, you’ll soon be exposed and judged for talking the talk.

Brand association is a real banana skin. British Cycling seeking the oil giant Shell as a sponsor and accepting its largesse in an eight-year deal has caused understandable outrage and disparagement for ‘greenwashing’ amongst their eco-aware audience. This indignation was further highlighted by Greenpeace’s heavy condemnation of the partnership.

“The idea of Shell helping British Cycling reach net zero is as absurd as beef farmers advising lettuce farmers on how to go vegan.”

Law firms, just as any large brand, must ensure their actions, partnerships, and values align in any well-structured sponsorship strategy – as authenticity is key. Failure to practice what you preach risks betraying your brand message and causing unwelcome unrest amongst your stakeholders.

The company, privately owned by Chinese marketing guru Chris Xu and loved by millions of millennials and Gen Z shoppers in the UK, said in response that it was extremely concerned by the allegations which “would violate its Code of Conduct agreed to by every Shein supplier” and promised to investigate the claims. However, it has said the same when faced with similar allegations in 2021.

Shein seems to attract regular bouts of negative publicity. It is regularly in hot water with high-end brands accusing it of copyright infringement and copycat designs – complaints from Zara and the owners of Doc Martens being examples. Only recently, its parent company agreed to pay US$1.9m to New York authorities for failure to notify all customers of the extent of a hacking and data breach incident.

Who will investigate Shein over the latest furore?  The company ships clothes to 150 countries. In the UK will we see them being investigated for breach of the Modern Slavery Act (MSA) 2015?

This law requires companies to prepare and make publicly available details of the steps taken to ensure slavery and human trafficking are not part of supply chains and the result of due diligence undertaken into business operations and suppliers. However the trouble with the MSA is the lack of teeth in the face of any contravention. Critics lament that it seems to be expected that reputational or commercial pressures suffice in doing the job of holding perpetrators to account in the absence of proper sanctions.

When he was Foreign Secretary, Dominic Raab talked about the UK government’s intention to introduce fines for businesses that do not comply with their MSA transparency obligations. However precise details of whether this is in the latest Modern Slavery Bill are still awaited.

Meantime the meteoric rise and popularity of Shein amongst Gen Z shoppers suggests a passion for cheap fashion is more important to them in financially constrained times, than concerns about Shein’s link to questionable human rights and unethical working practices.

Nonetheless, potential investors in Shein’s proposed IPO will surely demand it does a better job of upholding its ESG responsibilities. There has been talk that the company intends to list in the US in 2024 and of an eye-popping $100bn valuation.

If Shein does have ambitions to become a global public company and wants long-term success, it would do well to learn a few basic lessons, namely:

Regulators and law makers may not be quite there yet on scrutinising companies over their environmental credentials and ethical practices, but this is undoubtedly an area of rapid development. If Shein doesn’t walk the talk or communicate authentically, it could soon lose its sheen and swiftly find itself no longer in fashion.